Citywide research, advocacy, and mapping, facilitating the poor settlements access to sweet water in Karachi. Research shows that daily 41% of the water supplied to Karachi is siphoned from the bulk mains. This is then sold for profit, supplied through tankers b) Water supply provision (technical support) for the goths and c) The water supply provision in the villages in Battagram.

Water supply plan for Karachi: With the success in adoption, by the govt., of the OPP-RTI sewerage/drainage plan for the city and its on going implementation, preparation of a water supply plan has been initiated. Focus is to facilitate poor people access to water. Govt. engineers, CBOs and communities are partners in the process. Study of the bulk supply and defects in the distribution system in towns is complete. There is enough sweet water (650 mgd), major issues are 1) Siphoning: (theft) from the bulk supply about 290 mgd is sold for profit thru private tanker supply. 2) Power breakdowns in pumping: causing chaos in distribution, so the supply ranges from every alternate days for 4 hours to after 15-20 days for 30 minutes only. More then 30% of the city remains dry all year round i.e. dependent on purchase of water supplied thru private tankers or donkey carts. The latter supply of small quantities (about 25 gallons) is purchased by the poor at Rs.4/-gallon as against Rs. 0.4/gallon (the standard rate) for the 1000 gallons supplied thru tankers. Minimum requirement by the poor is about 15 gallons per person per day. In poor water starved areas brackish water is also purchased. Survey was completed of the 9 official/KWSB hydrants that supply water to tankers and are managed by the Rangers (para military). Instead of the 13,750 trips sanctioned (of 1000 gallons per tanker – the standard used for calculation only) 25,620 trips are being made. These are sold at Rs. 350-1000 per tanker (of 1000 gallons) instead of the official rate of Rs. 125 – 250. 9 unofficial hydrants have also been surveyed. Total 161 unofficail hydrants/filling points have been reported. There are about 12,000 tankers, each making 10-12 trips daily, 50% tankers are of 5,000 gallons and 70% supply goes to the industries. About 70 mgd of brackish water is also supplied to meet the demand. This is the lucrative alternative supply, where water is the high priced commodity, illegally managed by Rangers and groups of people in league with the police and local Nazims. This operation generates an estimated Rs. 42 billion annually. Detail report is being compiled, which includes suggestions for solution.

Two useful projects of dedicated bulk water mains (24” & 33” dia) for Orangi and the adjacent Baldia town (also housing the poor) has been sanctioned by the govt. This period work on site has been in progress. People have lobbied for these for the past more then 6 years. 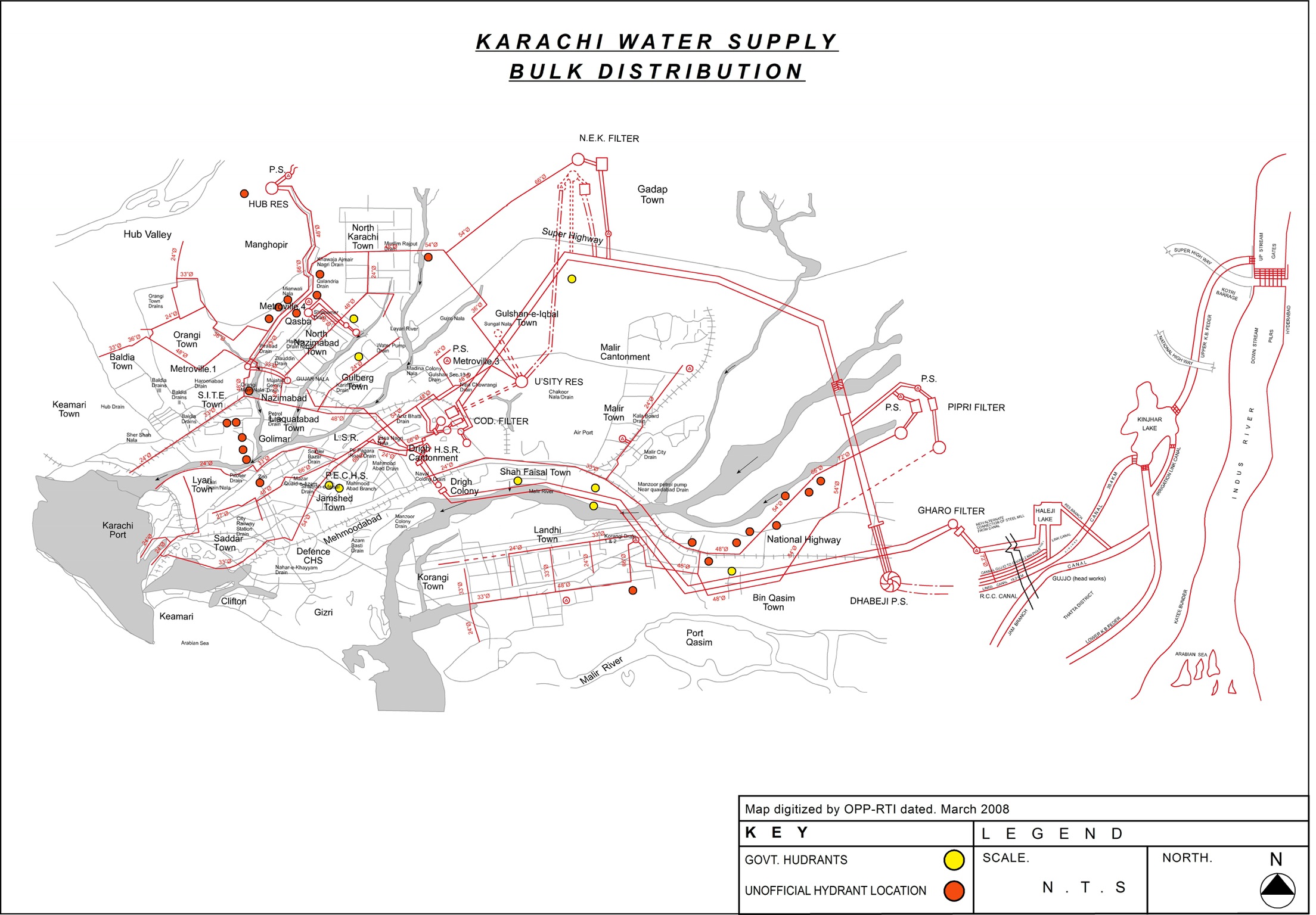 Water Supply programs in other parts of the country

REPLICATION OF THE LOW COST SANITATION PROGRAM OUTSIDE KARACHI

EXPERIMENTS AT THE OPP-RTI NURSERY

FLOODS-RELIEF AND REHABILITATION AND THE EVOLVING VILLAGE DEVELOPMENT PROGRAM